GIVE DEMOCRACY TO THE POETS 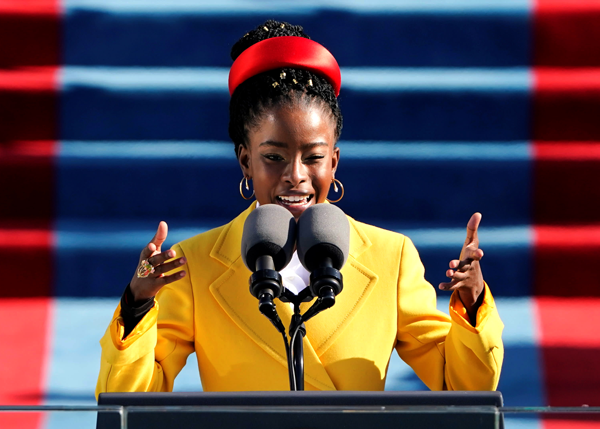 Last month, the world watched as Joe Biden and Kamala Harris became America’s new chief executives. The ritual of Inauguration Day is an American rite of passage. It’s the day we honor those charged by God and country to uphold the values and vision of this young democracy. The incoming President’s inaugural speech is an opportunity to set the tone of their presidency. This year was different, though, as threats of terrorism and a deadly virus hung in the air. Despite all this, the transition of power took place peacefully. And newly installed President Biden declared January 20th was “Democracy’s day”.

The dizzying events of the last year and recent weeks have made it hard to put pen to paper. It has been difficult to share what that day meant for me, for us, and for our sector. Bear with me.

Like many tuning in to the Inauguration, I watched with mixed emotions. One eye absorbed the celebration, while the other was wary. I worried that the poison of racism and hate would try, yet again, to kill our dreams, our visions, our aspirations. On top of that, it was a busy work day. And I was still holding deep sadness from the loss of 400,000+ of our fellow Americans to COVID-19.

As I listened, I longed for the amazing grace one of Michigan’s own courageous healthcare workers sang of. I owe my inspiration for writing to the poets and prophets who spoke over the inaugural events. Can we give democracy to them? They gave me hope, took me to higher ground, and teleported me above my pain. Because of them, I am able to hold onto the unmet promise of our democracy.

Despite a peaceful transition of power, harm has still been done. I am only beginning to process the trauma of having my personhood, my humanity, my existence threatened daily for four years straight. For the last one thousand four hundred and sixty plus days this nation has been terrorized by a narcissist. A bigot. A race baiter. A fascist. A traitor to our democracy. A deeply unwell, vitriolic person. It will take us decades to heal from the harm of #45.

After the election, I took a respite in the US Virgin Islands – the colonized land of the Ciboney, Igneri, Taino, and Kalinago peoples. I planned this trip for rest and reflection after a year of compounding hurt, trauma and work overload. Anti-Blackness, sexism, imperialism, patriarchy and other forms of oppression bring me to this water. It’s with my body firmly planted in the sand and on the ground, that I’m writing this reflection. I’m reading and writing poetry, being still, and seeing the land through my child’s eye. And, as always, I’m casting visions for my family, my work, and the projects I’m involved in. These are my tools for survival. They have been restorative and settling for my wounded heart.

Days before the Inauguration, I saw a blog post from my dear friend Julie Quiroz. (Julie is the founder of New Moon Collaborations – be sure to check her out). In the post titled, “Now Is The Time for Poetic Wisdom,” she wrote:

That same week, America was learning that another poet, a Black woman named Amanda Gorman, would offer the Inaugural poem. As Amanda’s name and work went viral, it wasn’t her Harvard pedigree or numerous accolades that drew me in. No, it was the sway of her hands, her full, pursed lips, the crown of braided nappy hair that felt familiar. It was her roots. She was raised by a solo-momma as I had been. She had built skill at navigating white spaces and filling them with her beautiful Blackness. Her draw was the promise of young wisdom and our shared demands for liberation, justice, and freedom. That, and our shared faith, was the root of my kinship with Amanda. She makes Black history both a reflection back, and also a look ahead. A promise of what is possible when we are truly free.

We are a nation made of millions like Amanda. People like Ozi Uduma, Assistant Curator of Global Contemporary Art at the UM Museum of Art. Their brilliance is behind the upcoming Unsettling Histories exhibition launching virtually this month. Young leaders like these offer us hope. Through their change making, we’re challenged to see different, better futures. But their genius will go unknown, if we don’t disrupt white supremacy and the allure of whiteness.

Knowing that Gorman would undoubtedly alter this American rite of passage made me giddy and gleeful. But after she read, I barely heard what anyone else had to say. Her powerful words crowded out the typical – and tired – calls for ‘unity’. (Let’s start with accountability before racing to the allure of ‘unity’. Been there. Done that. It doesn’t work {insert Capital riots}). Instead, Amanda reminded us that, “Democracy can be periodically delayed, but it can never be permanently defeated.” (Image credit: mccv / Shutterstock.com)

I also latched on to this quote from Pope Francis, shared by the priest who prayed for President Biden: “How important it is to dream together.”

In January’s Centering Justice session, A Vision of Transformation, we invited you to dream with us. When prompted with “What does freedom feel like?” someone wrote:

A clean wind that hasn’t blown for centuries now on the soft face of this Mother Earth. Running through the grasslands, as so many birds fly through untainted sky. Dancing with the purpose of speech, knowing the dance is Understood. Hearing the animals, even those that will never return, speaking back to them, asking forgiveness. Talking with the plants, thanking each for their kindness in providing food and healing. Walking peacefully in the night, singing to stories told by the moon. Learning the word which melts every weapon like water through the sand, so we all can speak it. Holding the rock face warm from the sun and the small stones given by the glacier, absorbing their hum relayed from the people of far distant planets. Before all that, freedom will feel like the palm of a stranger-friend with exactly those dreams and guiding spirits, joined in the throng too great, too strong, too beautiful and too loving ever to prevent.

For many Americans, the dream that our country’s leadership would reflect our human mosaic became more real. It’s significant that Kamala Harris is the first woman and person of color elected as Vice President of the United States. We should celebrate Vice President Harris’ election as one of our ancestor’s dreams come true. But we cannot forget that we’re also witnessing the intentional unraveling of those dreams. White supremacists and their allies are working hard to ensure that none of us are free.

And it’s not only them. The “white moderate” that Dr. King warned us against is among us, too. Leading our organizations, donating to our causes, mentoring our children. They cry for justice, yet invest in oppression. They accept donations from donors whose values are not consistent with anti-racism. They hire Black, Brown and Indigenous folx and then smother them under cultures rooted in whiteness. White moderates lead our boards, insisting on the status quo while neglecting to meet the mission they steward. How can we be committed to racial justice, while ignoring racialized capitalism as the problem in our communities?

There is no future where liberation and oppression can coexist. As we celebrate the legacies of Black folk in our nation’s history, let us not forget Amanda Gorman’s words:

Let the poets lead the way as we honor our history and transform the future, together.